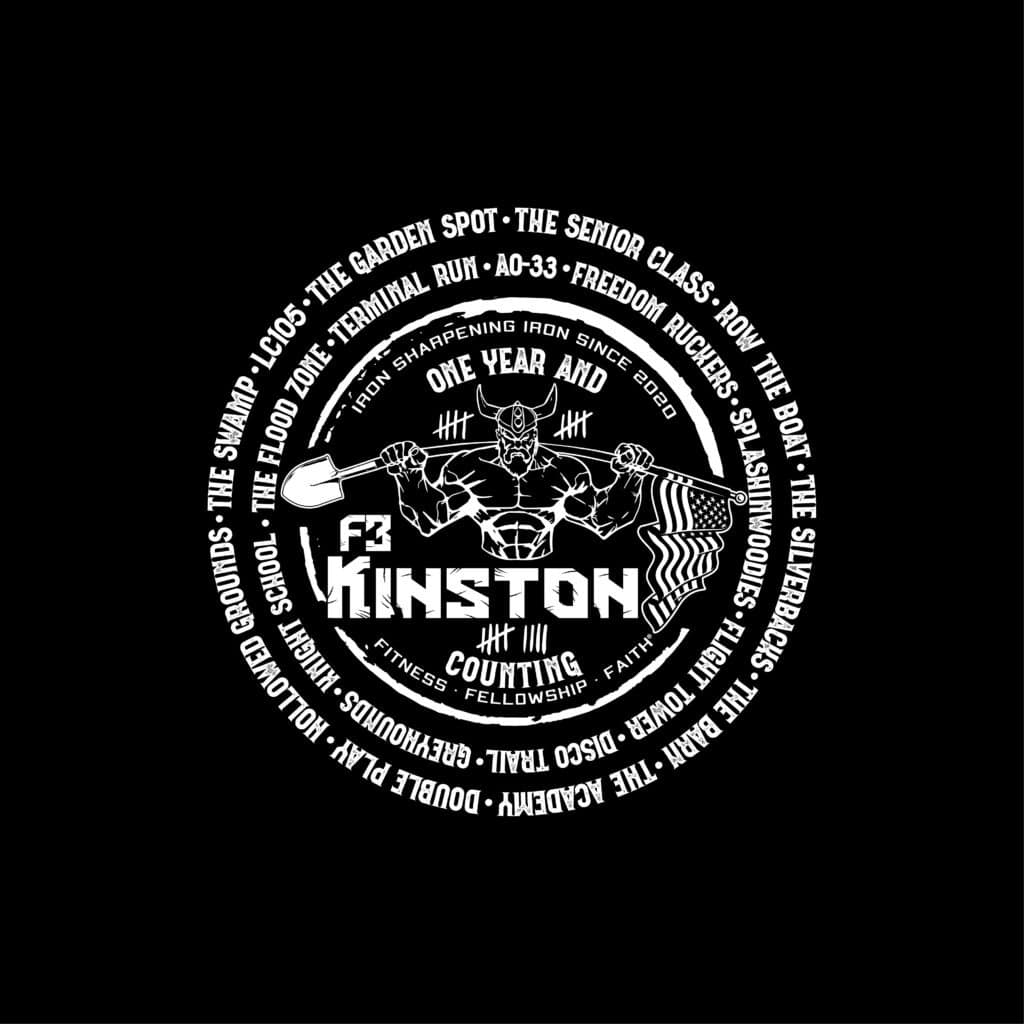 Moleskin:  A year ago, the ENC Men and Goggles began to plan an F3 expansion in Kinston.   There were some thoughts that F3 would never make it in Kinston.  However, one Saturday morning in the gloom at Bill Faye Park, 40 men came to Get Right, over 30 of those men were FNGs, pretty nice start.

After a week or so, the PAX of Kinston asked Goggles for more workouts, and the dynamite was about to explode.  An SLT was formed of some Sadclowns trying to get better without a clue of how to lead.  We started to grow, FNGs kept coming and then one Tuesday morning about eight weeks in, 33 posted at our Tuesday AO, The Swamp.  The picture went up on Slack and Bono posted a picture from Freed to Lead about ABD.  The Kinston PAX were completely against the idea of addition by division.  We didn’t think it would work, but we kept having a problematic workout, way too many men were posting at our AOs.

We finally divided with so much fear but excitement, and ABD worked.  More FNGs kept posting and all of a sudden a wild fire had set upon Kinston.  Men saw the importance of F3 in their life.  Less than 10 months into F3, Kinston has 19 established AOs with the 20th AO beginning on June 29th, a run with pain stations AO.  We have had 2 CSAUPs, plenty of 2nd F events with a weekly PAX lunch and monthly Happy Hour.  And there have been multiple 3rd F opportunities, with Q source and other service projects in the community.

With our one year anniversary coming up in August, we want to give back to the ENC and Eastern Fleet men who have mentored and supported F3 Kinston since August 2020.

Tha Thang:  Friday August 13th will be a 2nd F event for all M’s and 2.0s.  Led by Chestnut and his crew of True Smoke BBQ members, Kinston F3 is going to put on a major tailgate and feed all visiting PAX.  The tailgating starts at 4:00 pm on the 13th at Grainger Stadium, the home of the DownEast Woodducks.  Food will be ready by 6:00 pm, we are asking you to bring your own soda, water, tea and/or alcohol.  If you are drinking beer, wine, or alcohol, we are F3, so do it in moderation and try to use an ole fashioned red solo cup.  But we will have all the food and utensils ready for you.  Please HC with a count of family members so we know how much food to prepare for here.  At 7:00pm, we will move inside the stadium as the Down East Woodducks take on their rival, the Carolina Mudcats.  Let Shortstop ([email protected] or 252-933-3259) know how many tickets you will need if you are not part of F3 Kinston.  We have some PAX who have season tickets and we believe we will have enough to share tickets with our out of town guests.  There is beer and alcohol served at the game.  We plan to set up down down the right field line once inside the game.

Saturday, August 14th (Bill Fay Park, 1007 Phillips Rd., Kinston NC 28504), At 7:00 we will have our king building activity.  We will have 4 Q’s.  SOL out of Kinston will lead a low-impact/injured PAX workout.  Then Abu (ENC), Poacher (Cornerstone) and Akron (Greensboro) will lead the high intensity bootcamps.

After we gather for a large COT, the Kinston PAX and My Pleasure will provide Chick-Fila coffeeteria. HC here so we know how many biscuits and coffee we should order.  Starting at 9:00, we will hold an hour-long mini GrowSchool.  Leading us through the 4 quadrants of Q-source will be Tommy Boy (Greensboro), Hello Kitty (Carpex), Bono (ENC) and Beauty (Cape Fear).

What would a one year anniversary celebration be without a T-shirt?  The link for the Kinston One Year Anniversary is here.  Can’t wait to celebrate with all you Studs!

You can sign up for F3 our weekly newsletter about what is going on. We promise not to spam you.
F3 Kinston